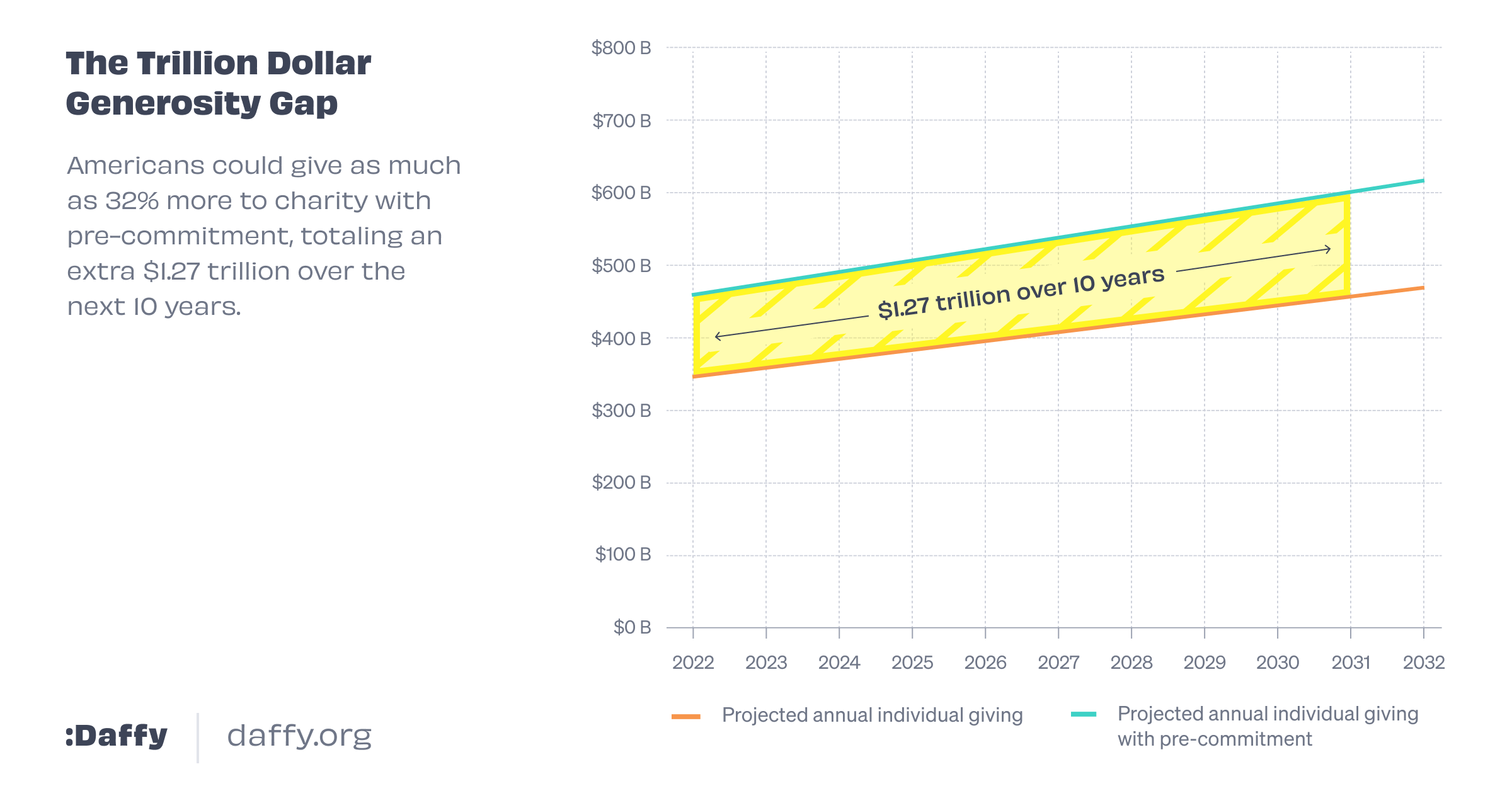 When it comes to charitable giving, Americans have a reason to be proud. In 2020, we gave over $471 billion dollars to charity, with over $334 billion coming from individuals. It’s a breathtaking level of generosity by any measure.

The United States has a “Generosity Gap™.”

People want to be generous and help those less fortunate than themselves, but we are all busy and life gets in the way. Unfortunately, that leads to a significant gap between what people want to give and the amount that they actually give.

How big? Well, by our estimates, if we could close that gap, it would unlock over one trillion dollars in additional giving over the next ten years.

When my co-founder Alejandro & I set off to create Daffy in 2020, we had a goal to use technology to improve how people give. We knew we wanted to reinvent the donor-advised fund, a product that historically has been targeted exclusively at the ultra-wealthy. As a result, one of our first steps was to do user research with people across the country, to understand how people think about giving to charity.

We asked people over twenty questions about how they think about giving and charity, but it turned out that the first three questions were the most telling:

A few things jumped out when we did this research. First, it was amazing to see that most people had an answer to both (1) and (2), and it was fairly consistent. Most people seem to believe that you should give something to charity, and they hold themselves to the same (or higher) standard than they hold others.

Second, most people do not agree on how much people should give to charity. Their answers were all over the map - some people spoke in terms of numbers, others gave answers as percentages. There was almost no agreement on the right amount to give to charity.

Why? Quite a few reasons, but in general, the issue just seemed to be that people are busy. Work. Home. Social. Did we mention the pandemic? You name it, but people just don’t seem to find the time to give what they believe they should give.

But how big is this problem? Bigger than we first thought.

Of course, this makes sense. How many of us would successfully save for retirement if we only made contributions whenever we saw a birthday reminder from a friend on social media?

Daffy solves this problem by asking people from the beginning to set a goal of how much they want to give to charity this year.

Like having a certain amount set aside in every paycheck in a 401k, Daffy then automates those contributions by dividing them into weekly, monthly, or quarterly contributions. We call it the “Daffy Pledge.”

Your money is then invested in one of nine modern portfolios, so we can help increase your potential impact. Then, when you do have the time, our app makes it simple to donate money to the organizations that matter the most to you, whether it’s your place of worship, a local food bank, or a global charity. Daffy supports over 1.5 million worthy charities that you can give to anytime and anywhere, just with a few taps on your phone.

Daffy helps you be as generous as you want to be, and that could be a very big deal.

If charitable giving continues to grow over the next ten years at the rate it has grown in the past decade (2011-2020) and if everyone was able to close that 32% gap, it would mean an additional $1.27 trillion dollars donated to charity over the next 10 years.

Imagine that for a second. An additional $1.27 trillion to support worthy causes across the country, all from just helping people be the good people that they want to be.

Announcing Our Series A Financing

Our goal is an audacious one. We hope to build a new platform and community, from the ground up, dedicated to giving. It’s a mighty task, but we’re optimistic and have the backing of some of the best investors in the world.

We’re grateful today to announce that Ribbit Capital, joined by XYZ Capital and Coinbase Ventures, has led a new $17.1M round of financing for Aside, Inc, the company that builds the technology platform behind Daffy. They are joined by over 50 notable angel investors, including industry luminaries like Reid Hoffman, Aaron Levie, Amy Chang, Dylan Field, John Lilly, and Mike Schroepfer.

It’s surprising to some that our company was founded in the midst of the worst global pandemic in over a century, but we believe this is exactly the right time to help people be more generous. We launched Daffy just a few months ago, but already we are inspired as we watch Daffy members begin to build a community of giving together.

Daffy can’t solve a trillion-dollar problem by itself, but we believe that our technology can help us solve it together.

Download Daffy from the App Store, or visit daffy.org and sign up. Take the Daffy Pledge. Invite others to do the same.

*Dr. Shlomo Benartzi is an advisor for Aside, Inc.

***“Give More Tomorrow: A Field Experiment on Intertemporal Choice in Charitable Giving” by Dr. Anna Bremany (Stockholm School of Economics), 2006.

Generosity Gap™ is trademarked by Aside, Inc. All rights reserved.